Now that you have your debugging environment set up, it’s time to get to the fun part – the exploit! The Hacksys Extreme Vulnerable Driver has a lot of interesting bugs to play with. My purpose in using this driver is to get familiar with ring 0 payloads more so than the actual vulnerability exploitation so I chose to stick with the easy stack overflow so I could focus on payload. Lets first take a look at the actual vulnerability.

Since we have the source code available to us, we’ll take the easy route first and just look at what’s going on.

If you haven’t worked with Windows drivers before, here’s some vastly over-simplified background info. User-mode code calls into the driver with the DeviceIoControl API in Kernel32.dll. The user-mode code provides a handle to the device with which it wants to interact (e.g. “HacksysExtremeVulnerableDriver”), an I/O control code (IOCTL) which basically tells the driver what function you want it to perform (again, grossly over-simplified; more on this later), and input and output buffers. The driver is passed an interrupt request packet (IRP) with all these particulars and passes the info along to a corresponding IOCTL handler routine.

The IOCTL dispatch function for HEVD is implemented as a switch/case in the IrpDeviceIoCtlHandler() function in HackSysExtremeVulnerableDriver.c:

As you can see the IRP and the stack pointer are passed to StackOverflowIoctlHandler() which is implemented in StackOverflow.c, a snippet of which appears below. The Size parameter is simply the length of the input that the user-mode code supplied.

Since we don’t always have the luxury of reviewing the source code of a driver, let’s take a look at a disassembly of the driver to see what this looks like. This is a bit easier than many real-world situations because of the helpful plain-text debug strings in the code and the fact that I’m using debugging symbols for the driver (the .pdb file in the Visual Studio project directory).

If you’ve done much reversing it’s easy enough to recognize the IrpDeviceIoCtlHandler() switch table in an IDA flow chart:

This is where the driver is comparing the IOCTL in the IRP to the IOCTLs that it knows about so it can call the appropriate handler function. Once it finds the matching IOCTL, it calls the associated handler:

As we saw in the source code, StackOverflowIoctlHandler() is a pretty small function that basically just calls TriggerStackOverflow() which looks like this in IDA: 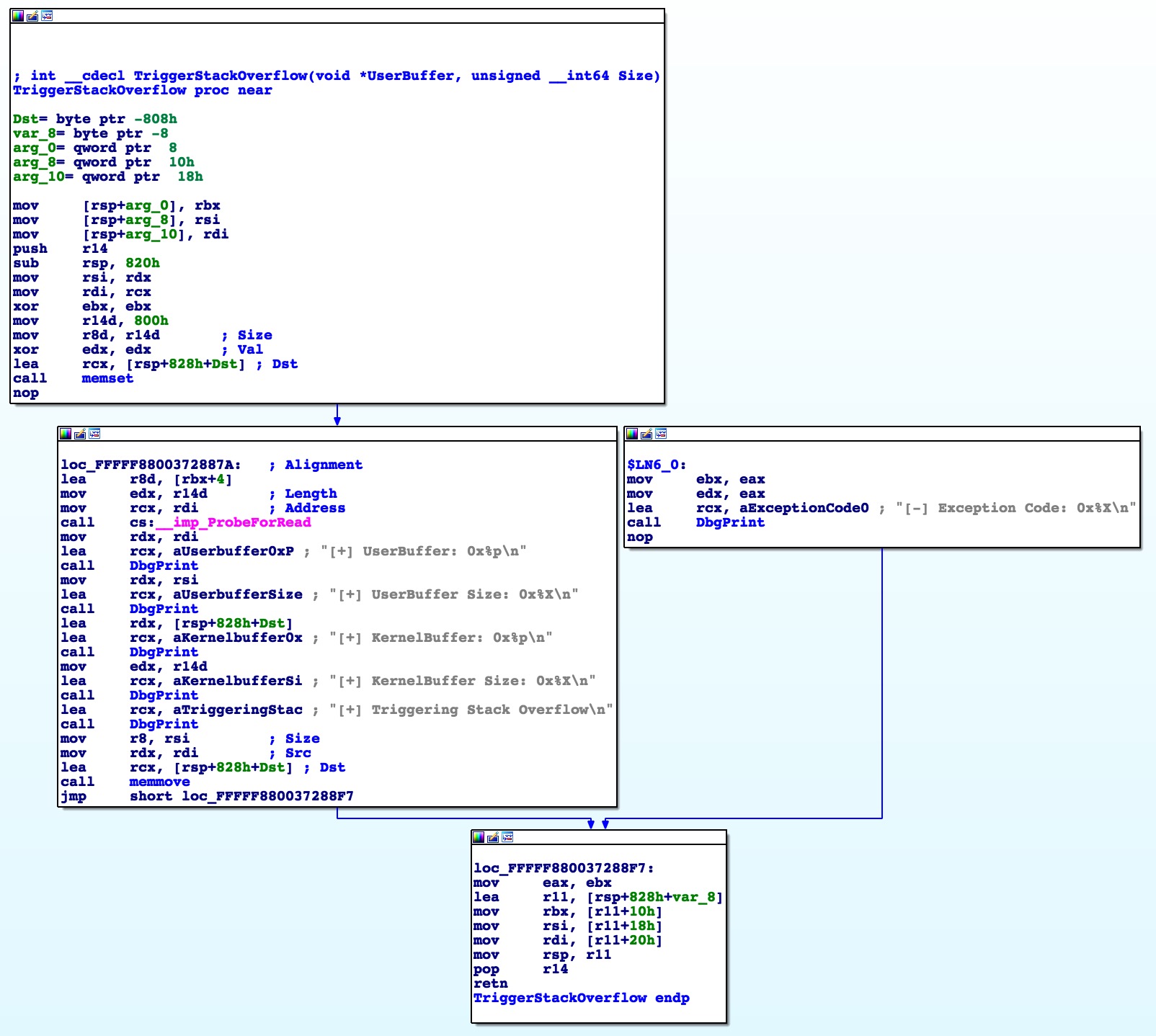 You can see in the call to memset that the function is expecting a buffer of 0x800 (2048) bytes. So with this information, it looks like we’ve got enough to start playing with the vulnerability and see if we can’t get a controlled RIP overwrite.

My other goal in doing this challenge is to get more familiar with Python ctypes. Why? Well because I like Python and because I’m taking the OffSec AWE course at BlackHat this year and they teach ctypes so I figured I should get to know it better.

So first step in writing any exploit is to map out the steps we need to take. This should be simple for a DoS so here’s the outline:

Step one - get a handle

To get a handle to the device we need to use the CreateFile API in Kernel32.dll. As MSDN says, this function “Creates or opens a file or I/O device. … The function returns a handle that can be used to access the file or device for various types of I/O depending on the file or device and the flags and attributes specified.” The function prototype is pretty straightforward and doesn’t require any special structures so we can go ahead and recreate it in Python pretty easily. Each of the parameters are documented in the MSDN article. I took the hex values for each constant (GENERIC_READ, etc.) and defined that at the top of my Python script and then created a function that calls the API and returns a handle to the device (mind the Unicode!):

Step two - get the IOCTL

IOCTLs are actually made up of four components - the device type, a function code, the I/O method, and the allowed access. This is all explained in this MSDN article as well as the Windows chapter in Guide to Kernel Exploitation among other places. The driver developer generally uses some pre-defined constants to specify these inputs except for the function code which is a hex value which can be more or less arbitrary as long as it’s above 0x7FF for 3rd party drivers. The WDK gives developers a macro to use to define these IOCTLs and you can see in HackSysExtremeVulnerableDriver.h that it is used here as well:

This macro is explained a bit more here. If I were writing my exploit in C I could just use the same macro but since I chose Python I have to either reimplement the macro in my script, or else just simply hard-code the IOCTL. I chose the reimplementation route since I was kind of interested in this whole IOCTL thing and because I can just copy/paste this into future exploits. After a bit of research, this is what I came up with:

Notice that I specify some common (I guess?) defaults for three of the inputs and only require the function code. This can then be called from my exploit code easily enough:

If you’re curious you can just run the macro manually to see what the IOCTL looks like:

The studious reader may be thinking “that’s all well and good if you have the source code and can see how the IOCTL is generated, but what about real life?” Indeed this is simpler than finding the IOCTLs in a closed-source driver and reversing the IOCTLs isn’t always very straightforward. Aside from using a tool like ioctlbf to bruteforce valid IOCTLs, you’ll usually have to resort to reversing the IOCTLs out of closed-source drivers before you can interact with them. Let’s take a closer look back at the switch table in HEVD’s IOCTL dispatch function which we saw briefly earlier.

IrpDeviceIoCtlHandler() starts by loading a hard-coded starting value (0x22201B) into eax and doing some math to figure out which side of the switch table to start from:

In our case the IOCTL we specified (0x222003) does not cause the execution to branch to the other half of the table (ja = “jump if above”; our IOCTL is less than, or “below”, 0x22201B). The driver then subtracts it’s next guess, which happens to be the one we specified, from the provided IOCTL and if the result is zero (i.e. they match) then it branches to the StackOverflowIoctlHandler() block:

Notice that if we had specified another IOCTL, it would have kept subtracting 4 from the IOCTL to find a match or else return an error.

There is a lot more that can be said about reversing IOCTLs and maybe that would be a good blog post for another time, but hopefully this at least gives you some ideas to start with when trying to find IOCTLs in closed-source drivers. The driver has to compare the supplied IOCTL with the IOCTLs that it knows how to handle at some point so look for that.

This step turns out to be pretty straightforward in Python. Ctypes gives us the create_string_buffer() function which suits our needs perfectly. We saw before that the vulnerable function is expecting a buffer of 2,048 bytes. It is safe to assume that we will not need too much more than that in order to overwrite RIP. With this in mind, I like to break out my buffer into recognizable units so I can see where certain variables are being overwritten. I’ll start with this buffer:

This should let us know where we stand when we trigger the bug and we can adjust as necessary.

As mentioned previously we now need to put everything together and use the DeviceIoControl function to trigger the bug. Again the MSDN page gives us the function prototype and explains all of the parameters necessary. We will give it the handle that we retrieved, the IOCTL that we generated, a pointer to our evil buffer as well as it’s size, and everything else is just null. My code looks like this:

If you are smarter than I was when I first started this it might occur to you to save your exploit somewhere safe before triggering a BSOD so that you don’t lose everything. I only made that mistake once :(. After you’ve got it safely saved somewhere, let’s run this thing and hopefully our debugger should show that bad (good?) things happened…

FIRE IN THE HOLE!

As you can see from this abbreviated output, a bugcheck was triggered when a ret instruction was called where the top of the stack contained the value 0x4343434343434343. Also of note, we own the rbx and r14 registers which will come in handy when we have to build out a ROP chain to bypass SMEP in Windows 8.1… More on that later. Stay tuned!